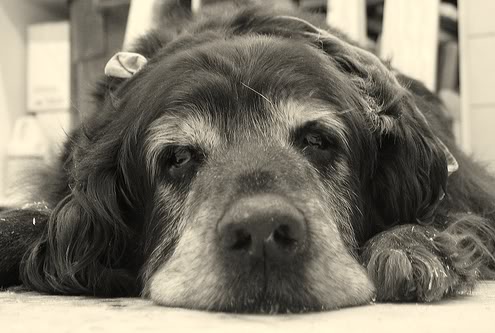 How to help your ageing dog

Just like humans, dogs are living longer. Many of them can maintain a great quality of life right into their winter years. We’ve pulled together a little list of what to expect as your pooch grows older. So what actually constitutes old age in a dog?

“One human year equals seven dog years” is the most common way to calculate your dog’s relative age. Our friends over at Hill’s Pet have written a great guide to doggo life stages.

Generally it can be said that any large pooch older than 7 years should be considered senior, while smaller breeds aren’t considered a senior until their teen years.

What are the signs of an ageing dog?

The process of ageing is slow and steady. Over time, your dog will become less active and excitable, and as their metabolism slows down they may put on a little weight. Their muzzle and ‘knickers’ might start to grey, and their hearing and sight will likely deteriorate. In the later stages of life it’s likely that they’ll have more little accidents, (which they’ll probably be embarrassed about, so it’s better not to scold them). Read on for more detail on the signs of ageing.

You may notice that your dog slows down a bit with ageing. This isn’t always the case, but look for subtle changes in how they get up, lie down, and use stairs. Is there any hesitation or stiffness? Does a downturn in the weather make it worse? It might be arthritis.

Arthritis is common in dogs as they age, particularly large breeds. Arthritis can occur in any joint, most commonly the legs, neck and spine, and is essentially the effect of bones rubbing together.

The PDSA have compiled a helpful list of the symptoms of arthritis in dogs:

If you suspect your dog has arthritis, it’s best to have it formally diagnosed by a vet who can suggest the best treatment plan. This will include a combination of medication and physiotherapy, and in extreme cases surgery. There are a number of things you can do at home to make your middle-aged mutt more comfortable. As their metabolism slows with age, your pooch will need fewer calories, and it’s best to start feeding them smaller portions several times a day to ease the pressure on their digestive system.

Implement any changes gradually over a series of weeks, and consult your vet before making any nutritional changes to your doggo’s diet.

Hearing loss and deafness is common in dogs as they age, just as with humans. If your dog is harder to wake up or starts to jump when you approach them from behind, it’s likely they are losing their hearing.

There’s not a huge amount that can be done to treat age-related hearing loss, but we’d highly recommend popping to the vet to rule out any other medical problems, such as an infection, growth, or foreign body in the ear.

Early in life, it’s good to cross-train dogs to recognise both sound and hand commands; our friends at Primal Pet Foods have created a handy list of common commands here. If not, all you can do is just be a little more sensitive to approaching hazards such as cars or people your dog may not have heard or seen.

As they age, dog’s eyes often show a bluish transparent haze in the pupil area. This is a normal effect of ageing. The fancy term for this is “lenticular sclerosis”, and it doesn’t actually affect their eyesight.

They can also develop cataracts (which appears as white opaqueness, rather than blue), glaucoma and suddenly acquired retinal degeneration (also known as SARDS).

If you think your dog is losing their sight, it’s best to get it confirmed by your vet. There’s little that can be done to treat this, but Hill’s Pet have some great advice on how to make life more pleasant for your visually impaired pal:

As your pooch ages, they will likely lose muscle mass in their hind legs. If you notice a reduction in mass around the head and the tummy muscles check in with your vet, because it could indicate something more serious like Cushing’s disease (a hormonal imbalance) or masticatory myositis which can give them trouble chewing.